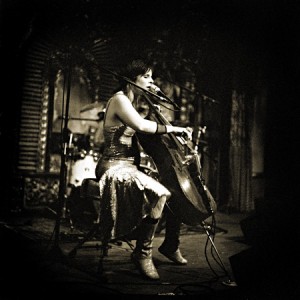 Starting on cello at the age of nine, Madigan Shive began her composing career at fifteen in the Pacific Northwest Riot Grrrl scene releasing music with seminal independent record labels K and Kill Rock Stars. Shive has gone on to establish herself as a singular and trailblazing performer, blending folk, art, punk, classical and avant-baroque styles. Her albums include Sew True, …from the Burnpile,Saddle the Bridge, Plays for Change, and the recently reissued I Bleed: a Decade of Song; she is currently finishing her sixth full-length album, to be released in collaboration with her label, MoonPuss Music.

She is a contributing author to the anthology Live through This: On Creativity and Self-Destruction (Seven Stories Press), sharing company with bell hooks, Nan Goldin, Kate Bornstein, and other creative pioneers. She is a founding collective member of The Icarus Project, a grassroots support and media network led by people living with experiences commonly labeled «mental illness.»

In the invisible republic built on the soul of the blues, the riot of punk, the playfulness of burlesque, and the sophistication of the orchestra pit, Bonfire Madigan Shive plies her trade. She and her cello are fashioning a new and desperately necessary approach to the hoary contours of the singer-songwriter and the composer. Her songs are ballads of resistance, hymns to liberation, string suites for the ramblers, rebels, and raconteurs of a new splintered century. Raucous and delicate, aggressively progressive, she moves subtly, seamlessly across the music you think you know and the music you never dreamed of. — Nathan Salsburg, Alan Lomax Collection, NYC