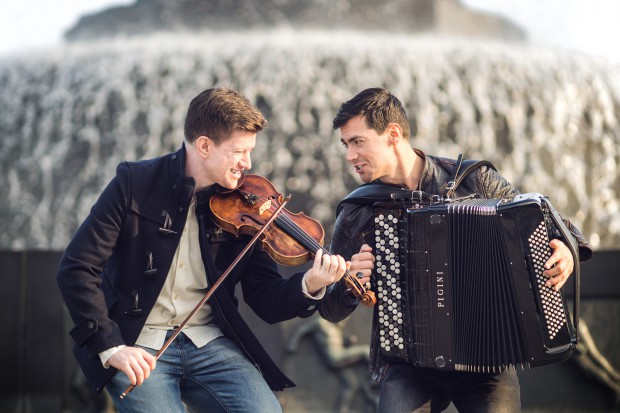 In a world not far from here, not many years ago, a war took place. Former Yugoslavia was breaking up, and peoples identities were divided and bodies scattered in the streets. Two children would accidentally be caught in the middle of that scene. They were Daniel and Almir. Growing up only miles away, they were still worlds apart. Daniel happened to be called a Serb, while Almir happened to be called a Bosnian. That made all the difference. Still, they were both touched by the unifying powers of music before the war started playing its thundering crescendo above their heads. Yes, they were only kids, but there can be a lot of wisdom behind two pairs of children’s eyes.

When Daniel was 10, he had already played the violin since the age of four. It was in his blood, and it offered an escape; an escape from poverty, an escape from the war, an alignment with beauty in a world ridden by horror. On this particular day he was caught in the violent air of a civil war protest against the terrors of Slobodan Milosevic. What should have been a safe way home from school, had now turned in to a scene of raging terror. Armed only with a look of innocence and his violin case, he looked up and faced the fighting parties. In a matter of minutes, the voices got softer and weapons were lowered. Once again, his music had magically delivered him an escape and perhaps even a perspective of what the world could be like – a place of innocence instead of war.
Daniel made it a sign to continue his efforts as a musical peacemaker, and the world seemed to cheer for him. He showed his magic by examining at The Music Academy of Belgrade with the highest grade possible, several years later. While most students prepare half a year for their final exam, Daniel did it – from scratch – in only three days. His wondrous talent and discipline later gave him an opportunity to seek fortune a place far away from home. He got a ticket to Norway, and he never looked back.

Almir was only four years old when the war broke out, leaving his opportunity in life less than none. Still, there were glimpses of hope, love and beauty. In cellars, at home, in school, and even more so – alone with his accordion. Could there be a language that would demand silence and peace, a language to dissolve hostile barriers? Almir found that language to be music. By dedication and virtuous talent, he continued his peace project in Bosnia, by finishing the Music Academy in Sarajevo on top of his class. A young boy had grown into a man; a man not driven by fear. As he qualified for the performer’s master level study at the Norwegian Academy of Music in 2011, he decided to take on a journey of faith. Leaving his family behind, he set his hopes high. His aspiration was to become a renowned musician, creating moments of true beauty in a country called Norway. Once again, he pursued the unified language called music – in a country – not ridden by war, but ridden with harsh winters and barriers of culture and language. The time had come to meet his twin soul Daniel.

Almir and Daniel once again proved their dedication to create love beyond borders. Today they are the best of friends and have united forces in their ongoing project to bring moments of beauty and an occasional party to the people of the world. Almir has played with the Norwegian Symphony Orchestra and even in the National Theatre on Norway’s liberation day. He’s played alongside some of Norway’s finest musicians, and so far his story is headed towards that happily ever after.

When Almir and Daniel unite, their worlds melt into a universe of splendor. Things go off in a big bang of creativity. It’s a gypsy flavor with a tad of Balkan, it’s Mozart and it’s the sound of the streets. It’s something you’ve never seen or heard before; it’s the fruits of two lives dedicated to creating moments far beyond the status quo and it’s a project continuing to travel across borders.