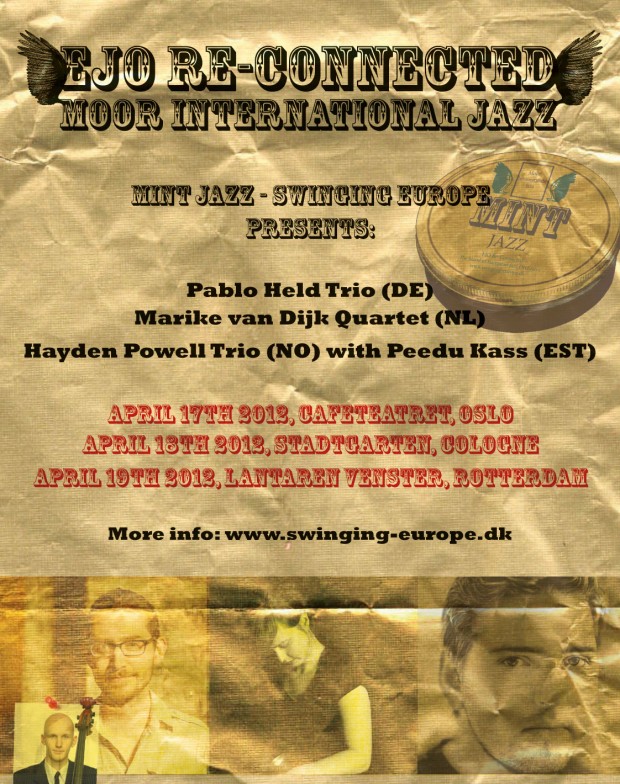 MINT Jazz is Swinging Europes new international platform for young European talents. In MINT Jazz 2012 three talents continue to build up their careers in Europe. They are hand picked out of European Jazz Orchestra 2011.

In 2009 Marike was nominated for the prestigious ‘Deloitte jazz award’ and the ‘Amersfoort jazz talent award’. She was also selected as ‘artist deserving wider recognition’ by JazzNL. End of october 2009 she recorded her debut album ‘Patches of Blue’, which was released on april 13th 2010.

The ‘Marike van Dijk Quintet’ performed on the ‘Northsea Jazz festival’ in 2010.

Marike is currently pursuing a second master’s degree at NYU, in New York, for which she was awarded a full scholarship by the prestigious dutch ‘Huygens Scholarship Programme’.

During her studies, Marike started composing her own music and started her own band ‘Marike van Dijk Quintet’. Her music is best described as modern creative Jazz – Jazz influenced by classical, pop and rock music

‘Marike Van Dijk has recorded lyrical and compelling tunes on her first outing. She plays with determination and a beautiful sound on all her horns. This music has a nice feel and shape to it. Well worth the listen!’ Bob Mintzer

‘Marike’s playing and composing has been an evolutionary delight. Her growth in concept and craftmanship have given us innovation and individuality. Marike has a passion for style and development that will enlighten us for years to come.’  Saxophonist Dick Oatts

British born, Oslo based jazz trumpeter Hayden Powell (28) has recently emerged as one of the most exciting young players on the Norwegian scene. His 2011 debut album The Attic received top marks from critics in Norway, calling Powell an original voice that stands out amongst other Norwegian trumpeters such as Arve Henriksen, Nils Petter Molvær and Mathias Eick. Powell currently leads a trio consisting of pianist Eyolf Dale and bassist Jo Skaansar, but for this tour Peedu Kass from Estonia will be taking position on bass. The band has appeared at many of the biggest clubs and festivals in Norway, with a full house at Oslo’s National Jazzscene Victoria a recent highlight.

With the release of The Attic, Powell brings his background in traditional jazz into a modern idiom. He plays with a warm, full bodied sound that can be both rough and clear, and a strong sense of melody. The music is mainly composed by Powell himself, and ranges from meditative and bluesy concept-pieces through uptempo themes and free improvisations. In concert, the trio is known for outgoing and creative performances, where spur-of-the-moment improvisations contribute to make each concert a special one.  In addition to Dale and Skaansar, The Attic includes guest musicians Tore Brunborg on saxophone, Erik Johannesen on trombone and the Dutch drummer Jasper Van Hulten.

Hayden Powell studied at the conservatory in Trondheim and at the Norwegian Academy of Music in Oslo, earning a master’s degree in performing jazz. Apart from his own band, he’s regularly worked with the Trondheim Jazz Orchestra, and is a member of Magic Pocket, who recently released the album The Katabatic Wind with Morten Qvenild on keys. Powell also plays with Finnish pianist Iro Haarla’s quintet (with Jon Christensen, Uffe Krokfoss and Trygve Seim) and was Norway’s 2011 representative in the EBU European Jazz Orchestra. He’s an active composer and writes music for large and small ensembles. His writing can be heard on Trondheim Jazz Orchestras 2011 release Kinetic Music.

Eyolf Dale is a pianist and composer living in Oslo. Dale is one half of the duo Albatrosh, who released their third album Yonkers in November 2011 on Rune Grammofon. It received great reviews in The Guardian and The New York Times. Earlier in 2011, he also released his solo album Hotel Interludes.

Peedu Kass is rapidly building a reputation as Estonias first-call bass player and released his own debut, entitled Home in 2010. Kass has recorded with Mark Gross and Antonio Hart as well as playing with Django Bates, Lonnie Liston Smith, Tony Allen and the European Jazz Orchestra 2011.

“A strong representation of the contemporary Norwegian improvised music scene”

”It’s not easy to stand out in Norway’s wealth of creative jazz trumpeters, but Hayden Powell does just that”

Pablo Held (*27.12.1986) grew up in a family of musicians in Hagen, Germany. From an early age on he was introduced to music from different backgrounds. At the age of four he took drumming lessons and with ten he moved on to the piano. At eighteen he began his studies at the Hochschule für Musik und Tanz in Cologne under John Taylor and Hubert Nuss.

Pablo is the recipient of the Westfalen-Jazzpreis 2009 and the WDR Jazzprice 2011.

He has published three CDs with the german label Pirouet Records and his trio with Robert Landfermann (bass) and Jonas Burgwinkel (drums) performed at international festivals such as the London Jazz Festival, the Berlin Jazzfest and the North Sea Jazz Festival.

“Held’s original works defy easy description. He doesn’t write short, snappy heads and songs that are built on predictable harmonic movement, featuring chorus after chorus of solos. His music is freely executed but somehow tethered to an accessible form, function and sound. This is music that remains focused but is, nonetheless, completely unpredictable.” Dan Bilawsky, All About Jazz 2010

“German piano wonder Pablo Held was only 23 years old when he entered the studio to record the music on Glow, but he had already earned his place in the pantheon of modern day piano trio leaders… As good as Held’s earlier albums are, they don’t hold a candle to ‘Glow’, which gets to the heart of Held’s compositional acuity in marvelous and myriad ways.”

“He plays with a subtle urge for nuance, letting his music glow” Jerry D’Souza, All About Jazz 2009