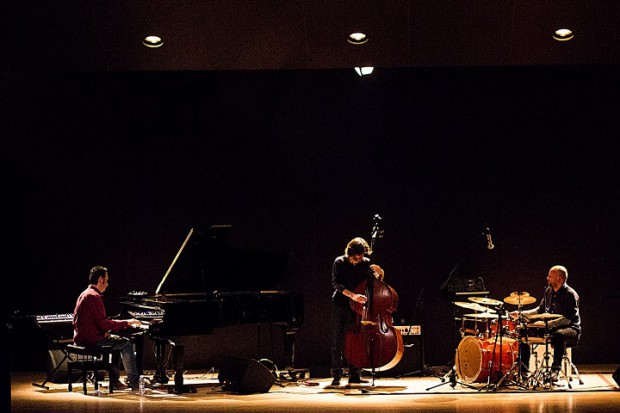 If creating an unmistakable group sound is the ultimate goal of a jazz ensemble, the Spanish trio Naima is well on its way to securing a spot as one of the leading combos on the contemporary European scene. Featuring Enrique Ruiz on piano and synths, Luis Torregrosa on drums, and Rafael Ramos Sania on double bass, the Valencia-based electro-acoustic band has honed a dramatic, darkly romantic sound marked by astringent textures, arresting melodies, and tightly coiled rhythms.

While the group has undergone several changes since coming together a decade ago, Naima has maintained the founding core of Ruiz and Torregrosa, who write and arrange the majority of the material together. Avoiding the jazz trio trope of a theme followed by a string of solos, they’ve concentrated on a group approach that often erases distinctions between soloist and accompanist. The ebb and flow of energy and finely calibrated inner dynamics, as well as their concern with melody and song sometimes brings to mind the trios of Vijay Iyer and Brad Mehldau and The Bad Plus, but in the hands of Naima, the results reach very different emotional terrain.

The artful use of electronic effects and synthesizer adds an unusual element to the trio’s sound, which flows from a collective ethos that «is one of the key factors of Naima’s music,» says Ruiz. «It is what gives the band its character and also exerts influence while we’re writing new material. We use synthesizers as an extra instrument, amplifying our range of colors and intensities.»

The origins for Naima date back to a fateful encounter between Ruiz and Torregrosa as teenagers. «We hit it off from the very start because he was wearing a t-shirt of [The Pixies] Surfer Rosa,» says Ruiz. «But it wasn’t until nearly 10 years later when we bumped into each other again at a jazz concert that we decided to start up a group together.»

They had a clear sense of musical mission from the beginning, writing original compositions and developing striking arrangements of songs by contemporary non-jazz artists like Depeche Mode, Elliott Smith, the Pixies and The Smiths. «We were totally sure about what we were doing and where we were going,» Ruiz recalls. «We wanted to set up a jazz band which would have a sound and some song material closer to the music from groups of the last 30 years, which we grew up with.» Pursuant to that goal, Bye features two revelatory ‘covers, Animal Chin, as performed by Jaga Jazzist and Smith’s Can’t Make A Sound.
A quartet in its first incarnation with tenor saxophone, releasing their first album in 2006, the group debuted sans saxophone in 2012. Inspired by other powerhouse triumvirates, Naima has also absorbed concepts from combos like disparate plugged in bands such as Tortoise, Jaga Jazzist, Cinematic Orchestra, and Christian Scott’s Stretch Music.

In many ways finding Rafael Ramos Sania was key to the band’s evolution, captured on Bye. «We were very lucky to meet him as its really difficult to find a musician who can fit into a group with clear ideas about how they should sound,» Torregrosa says. «He was able to adapt wonderfully well and also contribute new ideas. With him we’re now a compact unit and this disc is living proof of that.» With his big sound, elastic sense of time, and facility with electronics, he has contributed greatly to Naima’s riveting sound.

Featuring Enrique Ruiz on piano and synths, Luis Torregrosa on drums, and Rafael Ramos Sania on bass, for over a decade the Valencia-based electro-acoustic jazz trio NAIMA has been honing an original repertoire and a distinctive sound that escapes from a conventional mainstream classification within the world of jazz and is being praised for the fine-balanced inner dynamics, unique approach to melody and emotional energy flows.

NAIMA started in 2004 with the intention of making music influenced by jazz but not in any way bound to its rules and regulations. While the group has undergone several changes since coming together, Naima has maintained a group approach that often erases distinctions between soloist and accompanist creating dramatic and darkly romantic sound marked by astringent textures, arresting melodies, and tightly coiled rhythms.

The trio‘s latest album ‚Bye‘ was released in 2016 by Washington DC based company Cuneiform records, which is a solid milestone accomplished by one of the few Spanish jazz bands. The album was mixed by one of the best mixers in the music world Tony Platt, who has been working with Bob Marley, AC DC, Led Zeppelin, the Who and jazz trios liek The Bad Plus, and mastered by Ray Staff, who has mastered previously for Led Zeppelin, The Clash and Nick Cave.

The album ‚Bye‘ is on the top ten list of jazz albums of 2016 in Spain, selected by the well-established jazz portal for Spain ‚DistritoJazz‘.

In 2016 NAIMA was presenting the fourth album in the jazz club of Spain (Jamboree Jazz Barcelona, Café Mercedes Jazz Valencia, etc.) laying background for its presentation in Europe. In November 2016 NAIMA already made its statement in the Northern Europe taking part in the Vilnius Mama Jazz Festival (Lithuania). The forthcoming plans of the band this year are participation in Saint Petersburg Jazz Festival (Russia), Jazz & Cookin International Festival (Norway and Spain). Negotiations with other European festivals for the forthcoming summer-autumn period are being conducted at the moment.

NAIMA takes its inpiration in contemporary jazz trend-setters like The Bad Plus, the Brad Mehldau Trio, E.S.T. and Avishai Cohen as well as instrumental bands beyond the strict confines of jazz sound, such as Tortoise, Jaga Jazzist, Cinematic Orchestra, and Christian Scott’s Stretch Music.