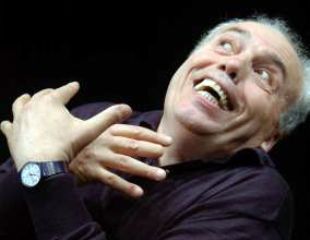 Translated and performed by Mario Pirovano

A celebration of life, liberty, truth and devotion. The story of St.Francis of Assisi.
Italy’s most important living playwright shows us some remarkable episodes from the life of one of the world’s best-loved saints.

Performed by Mario Pirovano, Fo’s great friend and collaborator, the play is a delightful slice of life in medieval Italy, full of relevance for our lives today. A tale that brings together courtiers, Popes, Cardinals, generals and peasants, Saints and sinners and Jesus himself in a great pageant of characters brought to life through a remarkable performance that sparks the imagination and delights the soul.

Dario Fo’s own Press Release: “Francis the Holy Jester,” is the title of this show. It’s a narrative about the life of the saint of Assisi, which uses episodes from his life which are often unknown or overlooked. The stories are drawn from authentic texts and from ancient folk tales of the Umbrian countryside.

I had always thought the label ‘jester’, applied to Francis, was given him by someone of great imagination and subtle humour, and that it was a late nickname, dating perhaps from the 15th or 16th century, the poetic invention of historians and writers. (…) In the research I have done on St Francis I discovered, thanks to an absolutely fundamental text by Chiara Frugoni, that Francis had called himself a jester, declaring right from the start “I am God’s jester”. At the beginning of the 13th century to saddle yourself with the label of satirical clown was provocative and dangerous, perhaps even crazily suicidal. The jesters were much loved by the humble people, but hated and persecuted by the powerful, who condemned them to the pillory on every possible occasion. There were even edicts against “professional clowns” , the most famous of which was issued by Frederick the Second of Swabia in 1220. (…)  But Francis didn’t take the label of jester just to be provocative: he really was a jester! He knew all the tricks of the trade, all the techniques and skills. Witnesses to his harangues, which were the performances of a real jester, assure us that Francis possessed remarkable vocal powers, which allowed him to project his speech to an immense crowd, often more than 5000. And more than that, he expressed himself by moving his arms, his legs and his whole body: “he made his whole body speak” wrote a historian who attended one of his performances in front of pope Honorius III, the pope who gave him official permission to preach, and who, when he saw him almost dance in his presence, was simultaneously both entertained and moved. (…)

“… I found him exceptional. Above all he didn’t take me off, he didn’t mimic me. He showed a vitality that was all his own, and the energetic inventiveness of a great story-teller.” – Dario Fo about Mario Pirovano’s performance

The performance has previously been on tour in United Kingdom and will this Autumn visit all capitals in Scandinavia and the USA.